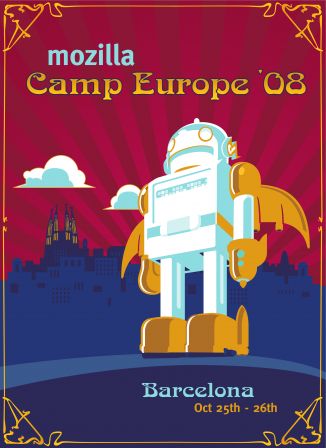 Some weeks ago Mozilla Camp Europe 2008 took place in Barcelona. Indeed, most of its activities were in Cornellà's Citilab, a wonderful urban lab perfectly suited for this kind of events. There is no doubt that was a success thanks to the hard work of people such as William and helping him was a pleasure. I feel personally proud of the final outcome because I think Mozilians could discuss in person many of the hot topics in Mozilla agenda and they also enjoyed their stay in my country at the same time. I can expect some even tried to mumble a few Catalan words during their night life incursions. ;)

But it was not only a chance for worldwide and European Mozilla Community, but also for local ones, such as the very Catalan Community. I consider events like this MozCamp help people know a bit better the insides of the whole project, the people behind, and encourage them to assume a major role in it. For a small community such as mine, that is very important, since a resulting proper organization and a defined commitment by even just a few people is likely to mean a success in the end.

Among the different topics, which were widely discussed afterwards and profusely quoted in Planet Mozilla, I would refer to 3 of them:

Mozilla localization procedures are still a high barrier compared to other open source software. On the other hand, present panorama consists of several applications which leverage users' capabilities to perform translations in their languages (spreadsheet of applications used by Mozilla l10n groups).
In this context, Zbigniew presented a new API: Silme, intended for designing and automating some common localisation tasks and creating new translation applications in a format-independent manner.
The most similar and useful stable platform is currently Translation Toolkit, actively used by several localization groups and deployed in some Mozilla projects such as Verbatim. In contrast to the former one, it's based on Gettext (the most used system in FOSS localization environment).

Mozilla is a huge initiative, with people (employed and volunteers) from all around the world involved in a plethora of issues, and not only in the very final-user programs. For that reason, even for people who have been collaborating in Mozilla for a time, it's not always easy to find out where to go and to whom address in different situations. When someone wants to start contributing, the situation is evidently worse, and a successful contact may depend on the proper knowledge of an intermediate actor, such as a local community.

In the meantime, we are also cleaning up Catalan Mozilla community wiki pages within the new Softcatalà website. If you ever thought about helping in this project we hope it's now easier to understand what we do, which tools we use and which documents we have as reference.

One of Mozilla sessions was devoted to discussing about 2010 goals, firstly introduced by Mitchell Baker during Whistler's summit.

Everyone attending this session seated in groups around different topic panels and suggested their own views. I got the chance to propose a few points regarding community marketing.
Concretely, despite situation in Europe seems to be better than in USA, I think Mozilla needs to improve interaction with other initiatives, both in global and local contexts, in order to focus on certain aims which could be beneficial for the different counterparts involved. Taking advantage of national, regional and local know-how is crucial for enlarging Mozilla ecosystem and for the future welfare of the project. In this aspect, locally based communities are a highly valued asset which I think Mozilla needs to take better care. I actually think 'competitors' envy having the spread human resources Mozilla has.

A few other links about Mozcamp08

Thanks Brian, I add it to links and I will take a look myself since I did not have the chance to be in these sessions.